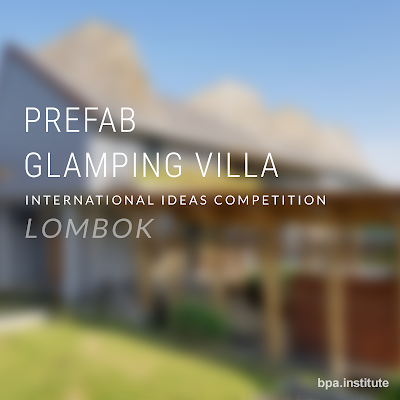 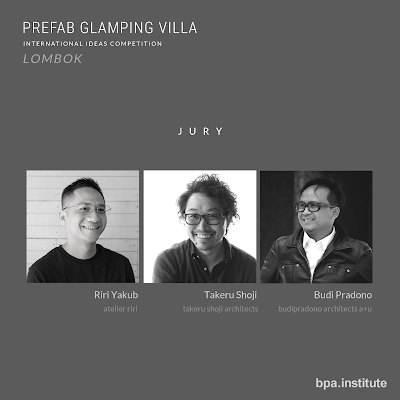 Competition Brief
In 2021, Indonesia will host the prestigious motorcycle race Moto GP for the first time. This world-class motor racing event will be held on a new circuit in the Mandalika Special Economic Zone on the island of Lombok in West Nusa Tenggara, Indonesia.

Currently, Lombok lacks enough places for tourists to stay. Over 60,000 more hotel rooms are estimated by the government to be needed for this event. However, community members can build prefab glamping areas around remote villages using locally available materials. Prefab Glamping Villa is an open-ideas competition to prepare pleasant temporary living areas for the touristswho will watch moto GP racing.

The Prefab glamping villas must be easy to build and dismantle and use as much local material as possible. The villas will be built one to two hours away from the circuit. Each villa should be 30–60 m2and able to be easily arranged in groups of 10–15 villas to becomeone composition with public spaces around it. Participants can choose from sites located in a hilly area, in the countryside near a river, or near the beach.

As this is an open-ideas competition, participants in the prefab Glamping Villa 2020 Challenge may interpret the competition brief in their own ways and choose the most creative way to fulfill its goals. This is an opportunity for architecture enthusiasts to rewrite the definition of temporary living on the island of the modern and digital society.

Location
The competition location is in Lombok Island Nusa Tenggara Barat (NTB) Indonesia, It is 30 minutes from Bali Island. You can Choose any place around whether in Beach front, at the mountain, or in the Cliff close to Mandalika Beach, which will be used as the new Moto GP beach front circuit.

Format
The most difficult part of the assignment is to follow these instructions precisely. Failure to do so will lead to disqualification.
Your proposal will be handed in digitally as two pages of A3 size. The orientation must be landscape (not portrait).
Your team number should be written in the upper right corner.
Any other information which compromises your identity will lead to disqualification.

The Task
1.Make diagram
Write the concept with diagram, understanding the tropicality of the location. Identify several prefab system, make some research about locally available material.
2. Select the Location
participants can choose from sites located (A) in a hilly area, (B) in the countryside near a river, or (C) near the beach.
3. Draw
Draw the modular of glamping villa. Draw the composition of multiple villa.
Draw the section and technical detail of the design.
Make some illustration with 3d view from several area.
4.WriteShortly describe the key features of the glamping villas complex. Up to 300 words!
Evaluation
1.    Creativity. Think beyond the ordinary standard. Surprise us!
2.    Be critical. Say something about the new concept of glamping, community and it’s relation to the moto GP
3.    Tell a story.
Delivery
Please read this information very carefully.
You are going to make FOUR files for the upload process:
1.    High-resolution PDF containing both A3 posters for your project. This file will be used for the exhibition. THE MAXIMUM FILE SIZE IS 10 MB FOR THIS FILE.
THE NAME OF THE FILE YOU SHALL USE IS: NO_GL_XXX-large-PDF.pdf

2.    Low-resolution PDF containing both A3 posters of your project. This file will be used for the jury process. THE MAXIMUM FILE SIZE IS 2MB FOR THIS FILE. THE NAME OF THE FILE YOU SHALL USE IS: NO_GL_XXX-small-PDF.pdf