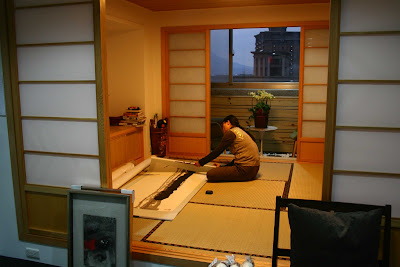 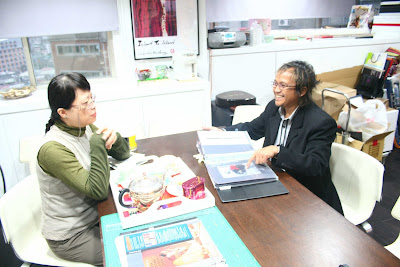 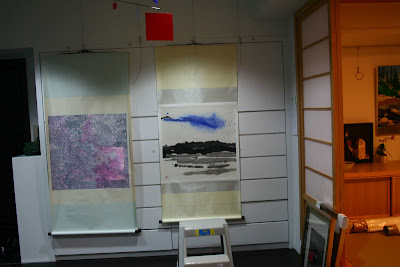 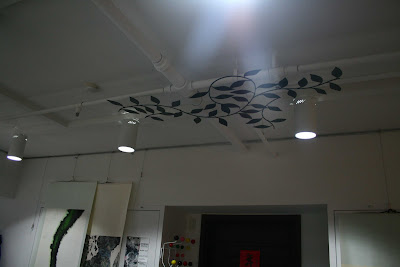 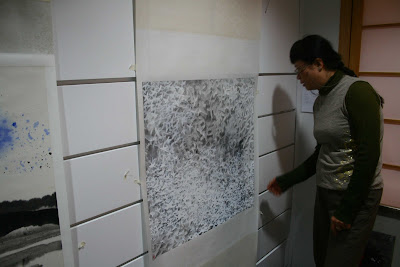 I was so surprised that Cindy Shin Min Wang is Ken Young's mother, one of my Taiwanese friend. I made a visit to her studio in Taipei and tried very hard to select her best work to fit into my architecture. I acted just like an art curator / critics try to understand one by one of her works. I felt that her spontaneous answer to all of my questions were really simple, just like what she did in her paintings. She shifted among multiple identities: immigrant in Vancouver, companion, mother; she is trying to cope with identities issues while being in foreign place, she was confronted a range of challenges in cultural, linguistic, and emotional terms. Her daily life became her inspirations. 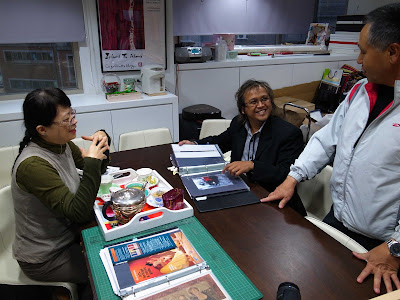 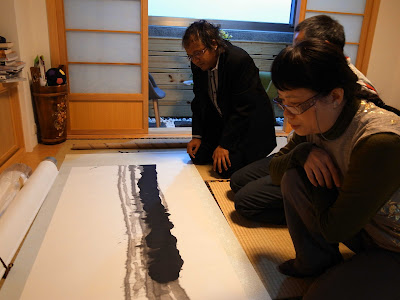 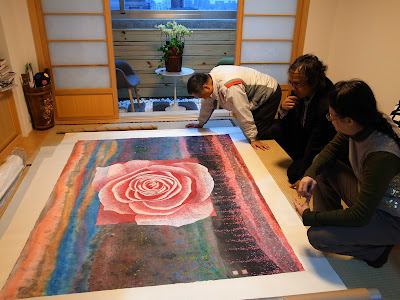 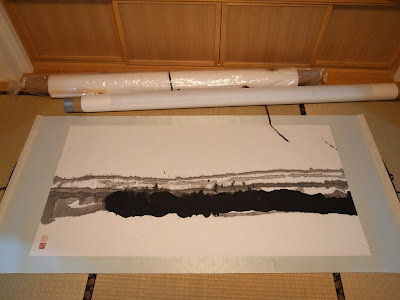 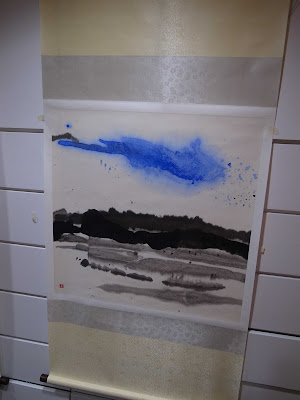 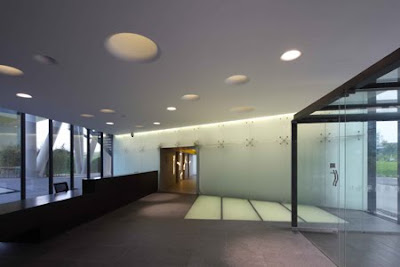 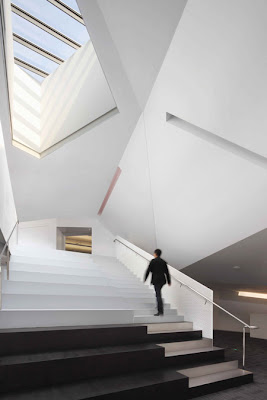 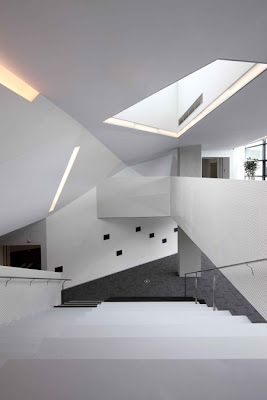 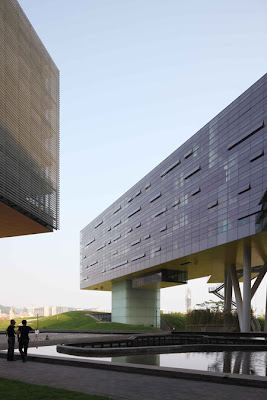 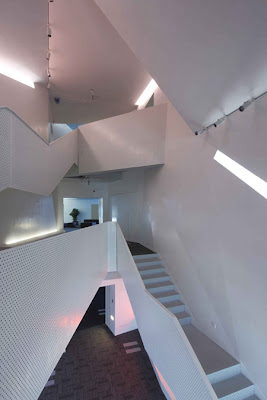 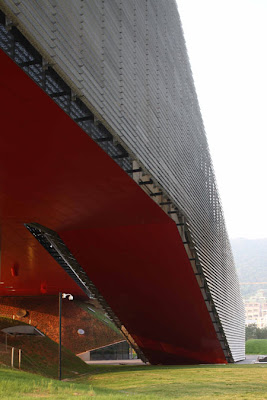 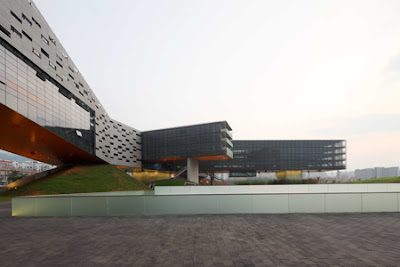 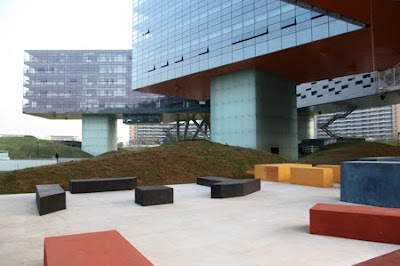 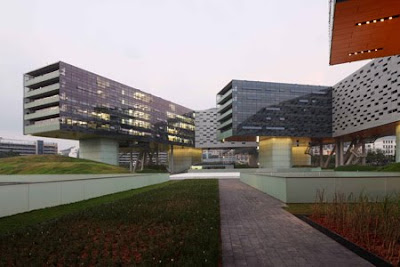 have completed a building conceived as a “horizontal skyscraper”, supported over a landscaped garden in Shenzhen, China.

The project has been awarded with a 2010 Honor Award by theAmerican Institute of Architects (AIA) New York Chapter. Holl’s Knut Hamsun Center at Hamarøy (see our earlier story) will also be awarded at the ceremony in April.

Called Vanke Center Shenzhen, the building is as long as the Empire State Building is tall, and includes apartments, offices and a hotel, with a conference centre, spa and car park below ground level.

The structure spreads out under the 35 meter height limit on the site, supported on eight cores using bridge-building technology and a concrete frame to maximise the area available for gardens beneath.

Photographs are by Shu He, Courtesy Steven Holl Architects.

Hovering over a tropical garden, this ‘horizontal skyscraper’ –as long as the Empire State Building is tall- unites into one vision the headquarters for Vanke Co. ltd, office spaces, apartments, and a hotel. A conference center, spa and parking are located under the large green, public landscape.The building appears as if it were once floating on a higher sea that has now subsided; leaving the structure propped up high on eight legs.

The decision to float one large structure right under the 35-meter height limit, instead of several smaller structures each catering to a specific program, was inspired by the hope to create views over the lower developments of surrounding sites to the South China Sea, and to generate the largest possible green space open to the public on the ground level.

Advanced structural technologies and construction techniques opened up the new type of flying architecture that introduces a new urban layer to Shenzhen.

Suspended on eight cores, as far as 50 meters apart, this floating horizontal skyscraper is a sophisticated combination of “cable-stay” bridge technology merged with a high strength concrete frame: a structure without trusses.

The underside of the floating structure becomes its main elevation from which sunken glass cubes, the so-called ‘Shenzhen Windows’, offer 360-degree views over the lush tropical landscape below.

Covering the entire length of the building a public path has been proposed to connect through the hotel, and the apartment zones up to the office wings.

The floating horizontal building allows sea and land breezes to pass through the public gardens. The landscape, inspired by Roberto Burle Marx’ gardens in Brazil contains restaurants and cafes in vegetated mounds bracketed with pools and walkways.

At night a walk through this landscape of flowering tropical plants will mix the smell of Jasmine with the colorful glow of the undersides of the structure floating above.

Under the landscape diverse semi-public functions create lively spaces. A large conference center includes a foamed-aluminum auditorium with green mohair seating that seats 400 people. There is a large spa with indoor and outdoor pools, and a polychromatic bar with large pivoting doors of 4.8 meters high that feel like giant lacquered paintings.

The ceiling of dark cobalt blue contrasts with walls in Chinese red and hand-applied gold leaf.

As a tropical, sustainable 21st century vision the building and the landscape integrate several new sustainable aspects. A microclimate is created by rectangular cooling lakes fed by a greywater system. The building itself has a green roof with solar panels and widely uses sustainable materials such as bamboo.

The glass façade of the building will be protected against the sun and wind by porous louvers. The Vanke Headquarter wing of the floating horizontal skyscraper is aimed at LEED Platinum. The Vanke Center is a Tsunami-proof 21st century hovering architecture that creates a porous micro-climate of freed landscape.

Steven Holl Architects has been awarded two 2010 Honor Awards from the American Institute of Architects (AIA) New York Chapter for the Horizontal Skyscraper in Shenzhen, China and the Knut Hamsun Center in Hamarøy, Norway.
The Horizontal Skyscraper, completed in December 2009, is as long as the Empire State Building is tall, and as one of the first LEED platinum rated buildings in Southern China, it recently received a 2010 Good Design is Good Business China Award for Best Green project.
The Knut Hamsun Center, completed August 2009, is dedicated to Knut Hamsun and includes exhibition areas, a library and reading room, a café, and an auditorium. The building is conceived as an archetypal and intensified compression of spirit in space and light, concretizing a Hamsun character in architectonic terms.

The winning Design Award projects will be recognized at the annual Design Awards Luncheon on Wednesday, April 14th. All winning work will be exhibited at the Center for Architecture, 536 LaGuardia Place. The Design Awards Exhibition will be on view from Thursday, April 15 through July 3, 2010. 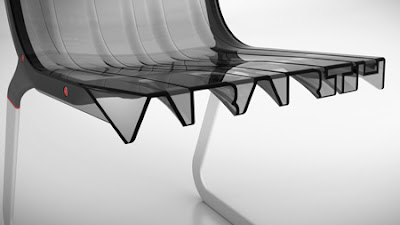 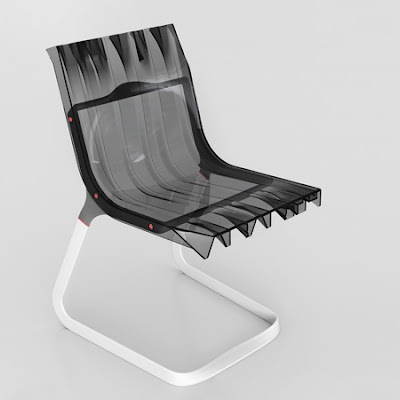 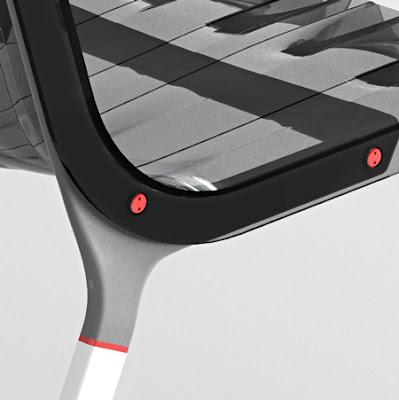 Posted by gonzo_tomato at 3:48 AM No comments: