An opportunity for architectural intervention and innovation.

I would like to start by conveying the positive values gained from ​a bad disaster. I believe that following a disaster, we as architects are born with a positive instinct. The instinct to build something that will produce new and innovative solutions in responding to the disaster.

In this decade alone, we have experienced many disasters.

Architects play a pivotal role in disaster mitigation and recovery after hazard events. Architectural design, then, serves to prevent or decrease destructive consequences of disasters on structures.

Quite recently, the ammonia explosion that occurred in Beirut was one of the triggers for change in the port security innovation system. This might also provide an opportunity for architects to create a new icon in this port to regulate new mobility to build a responsive architecture in the port.

I can already envisage that the revitalization of this region will lift Lebanon back into its position as a prosperous country. I know Lebanon from the story about a fig tree that is strong and rooted deep into the ground, and its wood can be made into a strong building.

I am sure that the new net generation is ready to bring in a new spirit in terms of mobility, a new façade, or new urbanism. 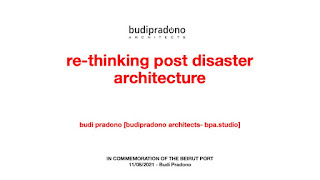 Can architecture make a significant contribution to the city?

Will this be is based on tolerance or negotiation? 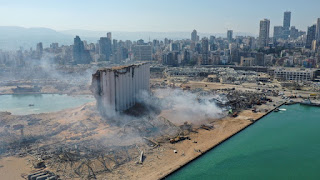 Moreover, at a time when the world's economic conditions appear to be deteriorating, amid uncertain political conditions, while the world is concurrently faced with the latest major environmental issues; regarding global warming, deteriorating ecology, urban density and poverty, or post covid-19 urbanism – we must prepare ourselves for the catastrophic events that lie ahead. Many architects behave opportunistically, ignoring relevant environmental concerns which has changed the role of architects as service providers only; providers of design services alone. 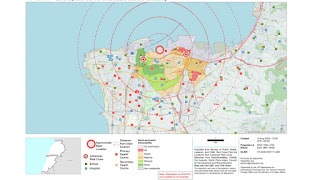 I am particularly interested in new phenomena in our city life that exist due to advances in communication technology. At the same time, we are experiencing a new wave of globalization 4.0, also referred to as the post pandemic architecture. As the research based architectural firm I will ask myself or my studio member: 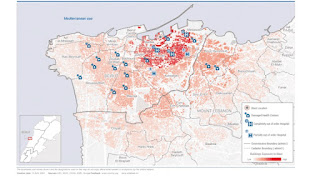 Can architects play a bigger role in new agendas of change that go beyond the architectural domain? Who has a far-sighted vision?

It is important to note that there is not a single material that serves as a good fit for all kinds of hazards. For instance, research shows that lightweight and natural elements can increase the resiliency of buildings remarkably against some natural disasters, particularly earthquakes. However, they might not be the optimal choice for flooding – e.g., raw wood swells in water in the other hand, traditional wooden houses may not exhibit the same resilience against different types of natural disasters, such as floods or typhoons, as well as wildfires. In flood-prone areas, architecture can reduce disaster risks by employing materials highly resistant to floodwater damage, including damage caused by moving water.

Ideally, new-built buildings should be built with a disaster-resilient architecture plan in mind.

What we could Learn From Disaster architecture

One of the new proposals of WTC 1 is The Bundle Towers (Designed by United Architects : FOA+GLK, KKA, IF & UN studio)

with a new high-rise typology. Indeed, the evolution of the high-rise has involved a process in which the tubular structures are kissing the skyscraper.

The Bundle Towers, then, engage with the building mass, rather than just with the distribution of the structure along the perimeter of floor plates. It is assembled as a bundle of interconnected structural tubes.

I believe this kind of architecture can provide innovation beyond disasters. 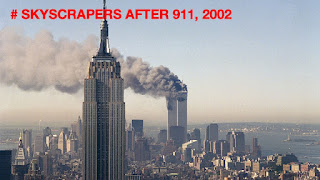 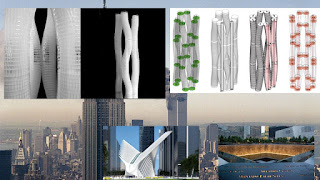 Later on our proposed tower in Manhattan was V tower, which is for

start-up companies, and this tower also offers a new typology

The Manhattan island is divided into the city grid and have no choice to develop horizontally, the island is destined to extruded on every land making it a place that collects various forms of towers. Since 1909 every inch of the land is contested and made an experiment about a vertical city. This vertical city group mutates programmatically until it reaches its most competitive point of commercial value. Manhattan produces the skyscraper as a symbol of the victory of capitalism. When two twin towers were destroyed by a deliberate raid by a pilot of architecture graduates, it may also be an attempt to destabilize the existence of this skyscraper building. 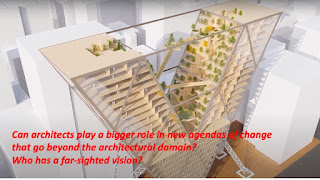 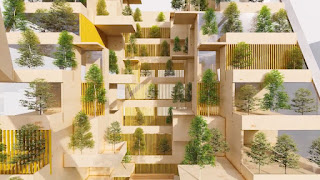 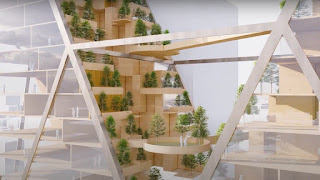 The V tower is an antithesis to a new challenge engine where it offers a mutated skyscraper and has merged with public space. This tower will provide a wider public space on the ground floor. On the highest floor of the 32nd floor is a collection of space with a terraced like a staircase is a green public space and in between the separated tower we provided an oval sky terrace. On each floor facing the public spaces it has been greened as an oasis of tropicality above the altitude. It becomes a new tropical garden in the sky. 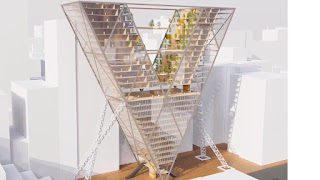 On each floor can accommodate an affordable and convenient place for start-up offices, which they can rent this place while utilizing the green area in a way. The elevator will be in three sections connected to the sky lobby. The tower is like a piece of an inverted pyramid, a V that has a sky terrace at the top.

Hurricane Katrina in 2005 devastated parts of the United States along the Gulf Coast. The herculean hurricane was moving toward New Orleans, Louisiana state, with winds reaching 235 kilometers per hour, accompanied by very large waves. The entire area she passed was ravaged, taking numerous lives. At least over 200,000 square kilometers of territory in the south-eastern United States was hit by Hurricane Katrina and was included in the category 5 storm, which had the potential to cause havoc. After the disaster came architectural innovation with Brat Pitt, who proposed housing of make it right from contemporary architects such as Adjaye, Frank Gehry, mvrdv etc – they made such a new direction building with pole and it is a collection of beautiful houses. 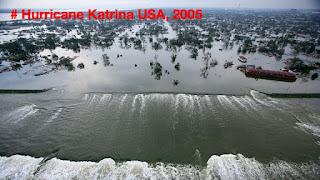 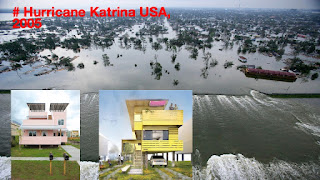 Our studio proposed a wooden tower in Durban Africa; this wooden tower is a modular honeycomb structure comprised of wood with a very flexible specific joint system. This effort is an innovation in system structure and programming. So this building has the flexibility to move and withstand wind storms. 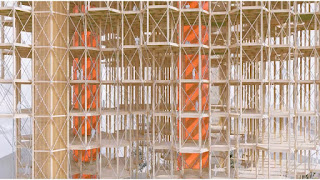 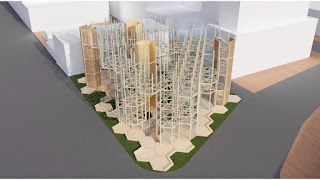 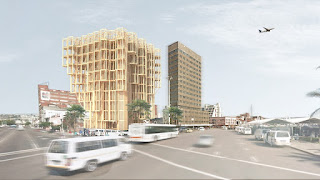 Jakarta floods occur every year, and in 2013, there were about 240 km of land affected by floods with 48 people dead as a result. 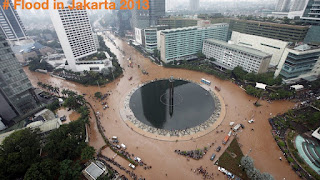 Our studio proposed the Fluid scape city, which has been exhibited at the Aedas Berlin in 2013. It attempts to respond to these catastrophic floods by creating a new ‘smart city’ and in turn establishing a new business district and residential area. Combining a series of Archimedes screws with solar and wind powered fans, the new system not only serves to regulate the water level in the reservoir, but can also treat it to serve and irrigate the neighboring regions. The city consists of office towers, modern apartment buildings and a vertical urban farm, which supplies organic food to the surrounding area. 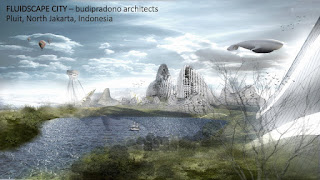 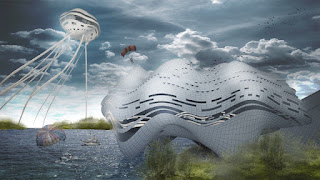 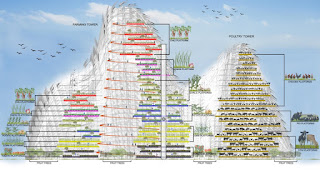 The waterfront area will not only become a tool for educating people about the importance of the water as a resource for everyday human life, but it will become a highly desirable destination, with a series of promenades and public spaces allowing people to enjoy the area once again. 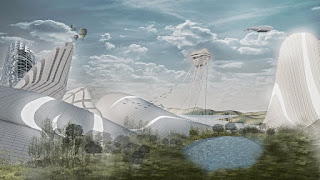 From some of the examples above, I believe that Catastrophic is an opportunity for architects to rethink our role and revive the Region. This is the right time for architects to rethink the future of our city, the future of the port of Beirut. By understanding their culture, its history, and new technology – I am sure that all students of architecture will become the new generation, triggering the government of Beirut to Rethink their own port in their own beloved city.

New-built buildings should ideally be built with a disaster-resilient architecture plan in mind.