Pixelated building of DnB NOR headquarters by MVRDV 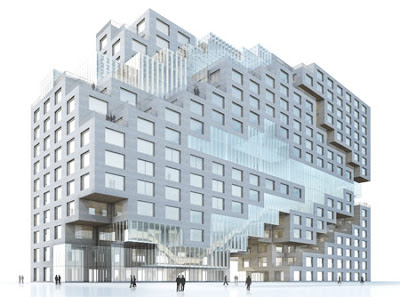 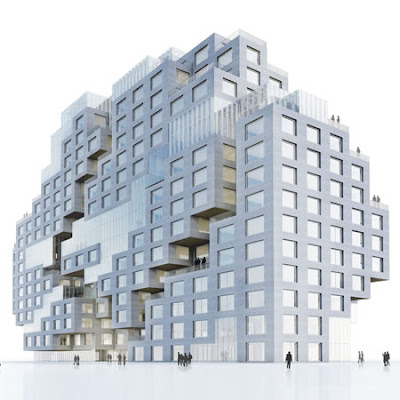 MVRDV won a competition to design Bjørvika waterfront in 2003, along with Norwegian companies Dark and a-lab. 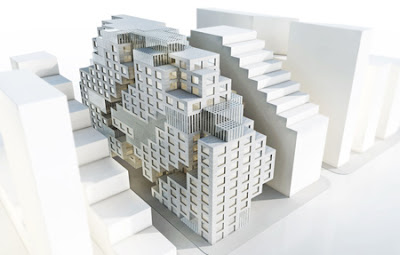 See our story from July 20o9 about MVRDV’s Celosia Residence in Madrid. 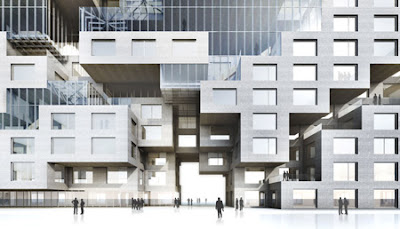 Here’s some info fro MVRDV:
–
Construction start for MVRDV designed headquarters building in Oslo, Norway
(Oslo, September 17, 2009): With the completion of the foundations up to basement level, the construction of the main building of the new DnB NOR headquarters in Norway, has entered its main phase. The new headquarter cluster with a total surface of 80,000m2, is developed by the Norwegian Oslo S Utvikling (OSU), and its central building, designed by MVRDV with 17 floors and a surface of 36,500m2, is due to be completed in 2012. 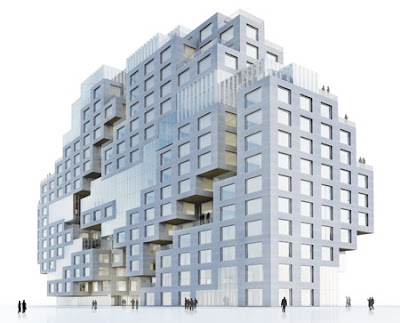 The pixelated design adapts to the urban context and combines an efficient and flexible internal organisation, based on small-scale working entities, with a variety of specific communal spaces, a sheltered public passage and respect for urban view lines. 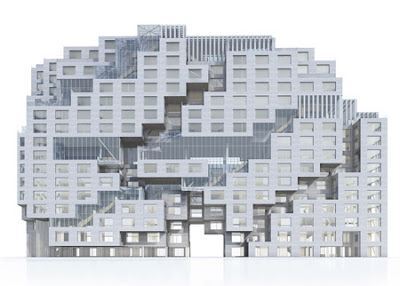 In 2003, MVRDV, together with Norwegian firms Dark and a-lab, won the competition for the Bjørvika waterfront development and designed a dense urban master plan along Nyland Allé, the Oslo Barcode, that will be developed and realised by OSU in phases.

The international Norwegian financial institution DnB NOR decided to concentrate their twenty office locations currently dispersed over the city in the Barcode. In 2007, the master plan team was commissioned by developer OSU to design the urban concept. A new cluster of three volumes and a common basement with a 3,000m2 underground concourse, which interlinks the three buildings of the bank, was developed. MVRDV was commissioned as architect for the central building and co-responsible for the concourse.
The development of a new headquarter cluster is a strategic operation aiming for synergy and a clear identity. The objective was to translate the social and democratic character of the organisation into a building with excellent working conditions and spatial qualities. The structure is conceived as a steel ‘rack’ which permits adaptation to the flexible nature of the organisation.
The steel rack is wrapped in a stone skin, which adopts Norwegian environmental standards. It appears as a rock, a strong shape within the boundaries of the Barcode. The niches of this rock provide space for vegetation growth: the positioning of the pixels creates roof gardens or outside areas for every floor.
The generic office floors recline and are recessed in various places to reflect the urban context and to create communal indoor and outdoor areas and outstanding daylight conditions. At street level the building volume is opened by sheltered entrance zones, and intersected by a public passage leading to the Oslo Central Station. The pixelated design allows this specific response whilst being highly efficient and flexible. As a result, every floor of the building is both unique and generic: the pixelated volume makes the generic specific.
Besides more than 2,000 flexible work spaces the building contains a panoramic 140 seat canteen on the top level, the executive lounge with a view over the fjord, the board room, in the heart of the volume, DnB NOR’s trading room with 250 work stations, and the main entrance with a reception and access to the concourse. These collective elements are connected by a staggered continuous internal route of terraces, encouraging informal meetings and communication between employees.
The route meanders from the reception upwards through the building, connecting all office levels with the communal areas. A series of wooden stairs and bridges allow employees to switch levels or even to walk the 17 levels up to the canteen on one side of the building and down on the other side. The route accommodates communal areas to the office floors and is made homely with a series of pantries, informal meeting areas and fire places. It gives access to the various outdoor terraces and roof gardens. All these collective spaces are designed as glass pixels allowing views over the surroundings and transparency from the exterior. The route is naturally ventilated and has a high performance glass fit for the cold Norwegian winter.
On behalf of OSU, MVRDV collaborates with Norwegian co-architect DARK Arkitekter AS and various Norwegian engineering firms. Project management is executed by Norwegian firm Vedal Project AS. The second building of the DnB NOR cluster is designed by A-lab and the third building by Dark Arkitekter, all within the overall master plan and the Barcode urban master plan by MVRDV / DARK / a-lab. DnB NOR is the largest financial services group in Norway. The Group consists of brands such as DnB NOR, Vital, Nordlandsbanken, Cresco, Postbanken, DnB NORD and Carlson.
–
MVRDV was set up in Rotterdam (the Netherlands) in 1993 by Winy Maas, Jacob van Rijs and Nathalie de Vries. MVRDV produces designs and studies in the fields of architecture, urbanism and landscape design. Early projects such as the headquarters for the Dutch Public Broadcaster VPRO and housing for elderly WoZoCo in Amsterdam lead to international acclaim. MVRDV develops its work in a conceptual way, the changing condition is visualised and discussed through designs, sometimes literally through the design and construction of a diagram.
The office continues to pursue its fascination and methodical research on density using a method of shaping space through complex amounts of data that accompany contemporary building and design processes. MVRDV first published a cross section of these study results in FARMAX (1998), followed by a.o. MetaCity/Datatown (1999), Costa Iberica (2000), Regionmaker (2002), 5 Minutes City (2003), KM3 (2005), which contains Pig City and more recently Spacefighter (2007) and Skycar City (2007), the latter two will be exhibited at the 2008 Biennale of Venice. MVRDV deals with global ecological issues in large scale studies like Pig City as well as in small scale solutions for flooded areas of New Orleans.
Current projects include various housing projects in the Netherlands, Spain, China, France, Austria, the United Kingdom, USA, India, Korea and other countries, a television centre in Zürich, a public library for Spijkenisse (Netherlands), a central market hall for Rotterdam, a culture plaza in Nanjing, China, large scale urban masterplans in Oslo, Norway and in Tirana, Albania, a masterplan for an eco-city in Logroño, Spain and an urban vision for the doubling in size of Almere, Netherlands.
The work of MVRDV is exhibited and published world wide and receives international awards. The 60 architects, designers and staff members conceive projects in a multi-disciplinary collaborative design process and apply highest technological and sustainable standards.

Posted by extravaganza at 6:28 AM

Email ThisBlogThis!Share to TwitterShare to FacebookShare to Pinterest
Labels: DnB NOR headquarters by MVRDV