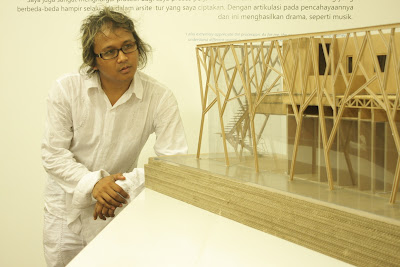 Why an architect does needs a long experience like an aircraft pilot? Or long breath as a marathon runner? Those matters differentiate an architect and a visual artist. A painter is a freedom person, he challenges himself. The final result is in the form of the work of art itself, if someone does not understand the values of beauty and the meaning of a painting that is not a big problem because a painting product becoming the work of artist not directly related to the function of space and type of its activities, even though it can be made a part of its spatial decoration.

There is no bourgeois class directing his painting so that the artist has unlimited freedom. This matter differentiates him with the architect in realizing the idea. In his nature of sub-consciousness, an architect thinks about his obligation to process idea in the several media of sketches, three-dimension models, mock-up, rendering and so on as a means of communication with his clients or the public audience.

Someone buying an abstract idea from an architect sometimes demands many things in order to be appropriate with his need and imagination, concerning spatial area, shape of building, material, to composition of space. Even, it sometimes the architect must be adapted to feng shui aspects. When it is compared to the marathon runner, often the architect has to run several laps again in order to reach point of understanding or compromise acceptable by the other parties. If there are no many practices, of course he can collapse on the street.

Experience of an aircraft pilot or an architect has several similarities, one of them is to practice the patience and intuition in conducting various maneuvers to go through the sky, to read compass and wind direction in order that the aircraft can remain move fast. The architect’s freedom is eventually left a bit (as big as a little finger) compared to his initial idea which is as big as the cloud on the sky. In addition to technical compromise with the structural expert that requires the architect to think pragmatically and practically. During this design process, imagination of an architect must be transformed into a public imagination in order that quality of space he thinks about can be understood. An architectural model becomes one of in-between bridges of the architect’s imaginations in order to be easily understood by its community.

Then, when I learn from such differences, architect’s long and complicated creative process is found to have its own beauty. I then realize that big idea and concept in a building consist of a group of so many small ideas. Even though challenges of architectural designs insist me to continuously innovate, when design process begin, there are several aspects of compromise and dialog that must be followed and sometimes it is found to be able to produce amazing and unpredictable results.

I am must also more flexible in responding regulations, examining functional program, exploring the material, combination or composition of various materials and all of them direct to something to be reached later, either quality of physical and implicit space. Such phases are not only parts of the architect’s concept implementation but also including tug-of-war journey process in the form of practical negotiation with the need of end-user having specific criteria in every space. Then pragmatically specification of end-user must remain be translated aesthetically for the sake of producing a stunning, unique and personal arrangement composition.

By taking into account the process of a work of design since the beginning to the end, it can provide inspiration for the next project. This underlies why I would like to organize the exhibition entitled’ In Process’. The process on design architecture it is found too long compared to creative process of other disciplines. In the world of architecture, the role of architect is to create and process the basic idea first, then it is communicated to other experts such as structural, mechanical and electrical experts and so on. I realize that integration of various disciplines is extremely needed not only on paper but also in the construction field. In globalization era as a present, I also start to play role in various projects abroad that requires me to make justification in order to absorb the language and cultural differences. Finally, I am increasingly realizing that architecture is a universal art of design, language of picture becomes the ‘adhesive’ of dialog among such differences.

I wish always to use local materials which are weak and susceptible to weather, that have ever been used by the human beings since long time ago such as clay, bamboo, stone, pebble, brick stone and so on which are combined with industrial materials such as steel or glass. This exploration of course needs intensity and sensitivity on the materials.

On the other side, I would like to maintain relation between environment and building (architecture), particularly because I grew up in tropical country, I would like to make relative relation with the nature by means of perforating, or make the wall becomes slightly porous so that it actually produces a very interesting interior. Basically, in our country where the sun shine at any time, it inspires that actually border of indoors and outdoors can be made relative or it is not necessary to be bordered with too rigid thing, which is able to integrate with the nature. The effect of various materials makes silhouette or reflection exist either from inside the glass or water. This spatial quality I call ambiguous space. This space is life because the silhouette that presents so that it has fourth dimension; time, light and reflection.

In several projects, I have tried to utilize laser cut technology, a machine which can cut steel finely so that it can produce beautiful ambiguous space. I appreciate this space as a bridge between the building (architecture) and nature.

Quality of this space atmosphere always changes depending on parameter of outdoor and indoor lighting. I visited Hiroshige Ando Museum in Tochigi, one hour trip from the outside of Tokyo city, several times during different seasons and period, I found that spatial quality offered always changed and always new. This is because lighting quality during every season is different.

As for me, a massive wall places a too-hard border, like separating a place to another place. A rigid border, as for me, insufficiently give opportunity to dialog between the nature and architecture that I create, in which there is an intense dialog between indoors and outdoors, there is transfer of information between both. Like shoiji paper on Japanese traditional building that provides freshness of lighting into the space or otherwise interior of a building can distribute silhouette to outside of building during afternoon or evening. An exchange of information needs ray as it media. I would like to use exchange of information as present that forms the architecture so that spatial scope needs to be questioned again its porosity, or its material so that mysterious relation between human being and the nature will remain exist.

The cover of a place is a medium of information penetration of outside environment. If we get perforating on such cover has become a media as information penetration either in the form of lighting or all particle on air. This media is as actual second skin that can be reprocessed, hurt, provided with various perforating pattern so that it becomes a filter for the presence of lighting into the building.

In presenting this ambiguous space, I am also not reluctant to question again the roof that always tight-closed so that we need artificial lighting. On R-house and H-house projects, part of their roofs have been substituted with grasses to reduce heat as well as to make the city green but several parts tend to be open and given glass and metal articulations so that it is able to produce natural lighting into the house as well as present this mysterious spatial atmosphere.

I also extremely appreciate the procession. As for me, the process of human being journey to understand different spatial quality nearly always exists in architecture that I created. With articulation on its lighting. This produces drama, such as music. This can be felt such as on ISSI villa project in Bali, R-house and Kencana House in Jakarta. People who come to my projects are invited to see through and experience fully the space whose atmosphere always changes.

Therefore, in the concept of this exhibition, I would like to perform various documentations in the form of sketches, film, an architectural models, mock-up to daily notes such as artifacts. This concept is very suitable with character of location where this exhibition is held, at Mandiri Museum, Jakarta Kota. In addition to, the most importing matter for me is to give opportunity for myself to conduct a moratorium, see through again architectural process itself so that I remain able to understand current needs and make auto critic. Since the building has its own ‘story’, then this exhibition shows 13 different projects with various phases. Each project has its own excellence. For the most part showed here are unfinished or nearly finished projects, with the range between six months to seven years. If these projects have finished I believe that documentations of design process and implementation become something very valuable. Therefore, I have expectation that this exhibition can give motivation and inspiration not only for young generations but also for our contemporary society. 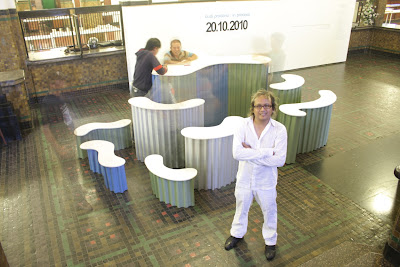 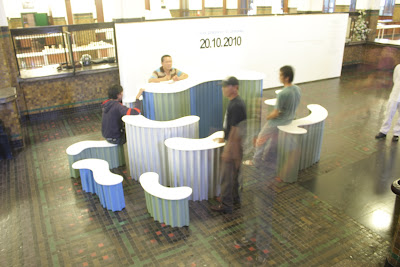 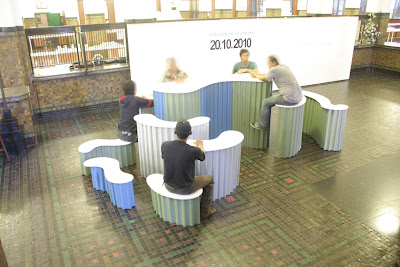 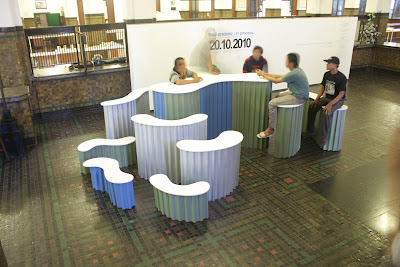 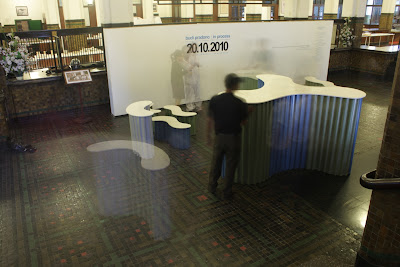 Posted by gonzo_tomato at 8:25 AM No comments: