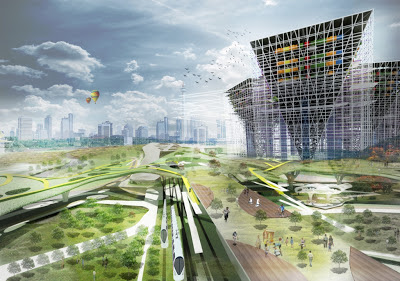 The ‘Inverted Pyramid’ proposes a redefinition of the traditional Kampung slum neighbourhoods in Jakarta into a vertical contemporary urban village located in the Manggarai region of the city. 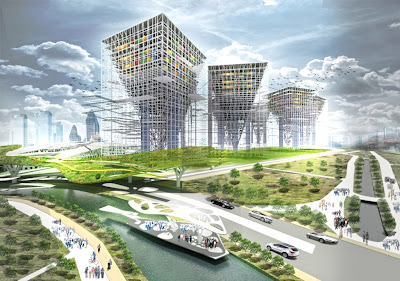 A Kampung is typically a very informal and irregular settlement, and often very densely populated. The Inverted Pyramid uses the same informal principles allowing social spaces to occur at random within its voids, whilst allowing for a higher population density in the area due to its vertical nature.
The geometry of a pyramid is typically conic solid with a polygonal base. The pyramids were first built on earth centuries ago, with some historians claiming the earliest to have been in Egypt at 450BC. The Inverted Pyramid proposal by BPA will be the latest to be realised in the 21st Century in Jakarta if it is built. 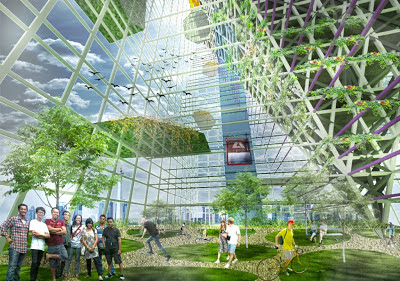 The Inverted Pyramid by BPA was selected as one of the representatives for Indonesia in the recent exhibition “The Atlas of the Unbuilt World”, which ran from June 7th-June 27th at the Bartlett School of Architecture in London, UK. 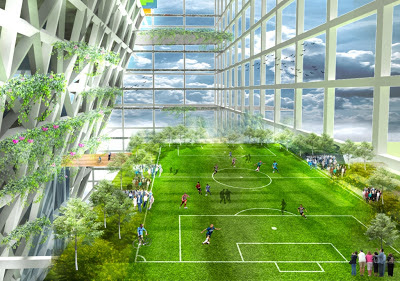 Pyramids have been used for centuries by the ancient Egyptians and Mayans, who used the buildings as tombs for past kings, places of worship and for food storage when preparing for famines.
The geometry of a pyramid is typically conic solid with a polygonal base, however there are many different versions of pyramid construction and much speculation as to their origins. Some people simply call them heritage buildings, whilst others link them to extra terrestrial theories, comparing them to pyramid formations on the surface of Mars and arguing that they have the same degree of latitude. 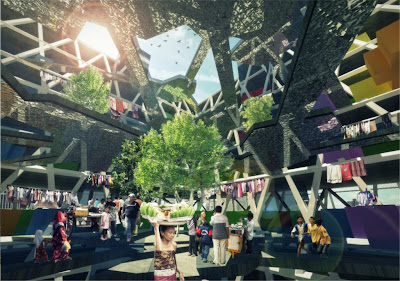 Some say they were first built in the lost city of Atlantis, and the recent discovery of three potential pyramids found encased in ice in Antarctica creates even more mystery as to their origins.
The Inverted Pyramid by BPA is a utopian proposal aiming to reverse the perception of the pyramid as an exclusive place for royalty and ceremony and instead making it accessible for all. The new inverted cone will provide public spaces as well as accommodating water and sun to provide energy for the pyramid. 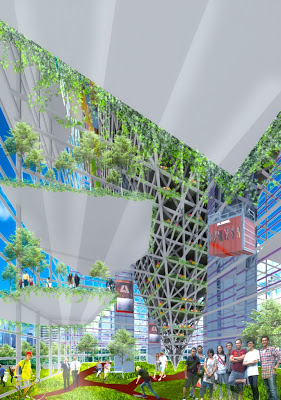 The steel frame of the structure not only produces energy for the pyramid through solar collection but also houses a number of vegetable and fish farms and provides balcony spaces for live/work business units.
The pyramid provides six blocks of social housing as well as a block of public facilities including mosques, churches, leisure facilities and car parking. It also incorporates an extensive urban park into the cityscape.

The new concept strives to maintain the culture and lifestyle already found in the traditional Kampungs, allowing for individuals and families to rebuild and renovate their own home with different typologies of doors, windows and partitions, which is key to the spirit of the settlements. However, the pyramid is a much more sustainable habitation than the traditional horizontal villages as its structure can produce energy for the dwellings, which is typically absent from the homes. 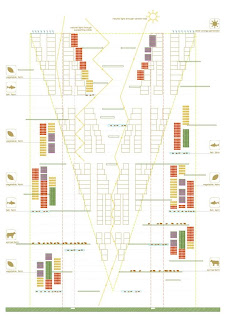 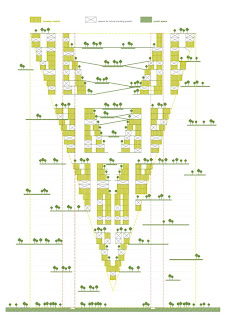 The Pyramid’s infrastructure allows people to easily reach the highest level via lifts, stairwells and other modes of transport. These upper levels are connected from one side to the other via a series of high-rise pedestrian walkways across the void.
In each pyramid the community is given the allowance to develop home based businesses, such as sewing clothes, repairing electrical goods and so forth, in order to support the informal sectors within the community and maintain the balance of the city and contribute to the economic climate of the surrounding areas.