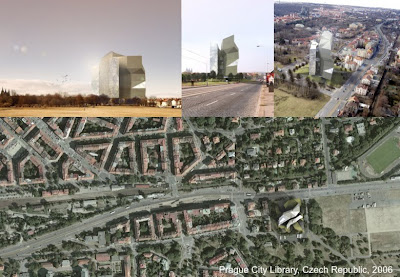 A very large quantity of books collection becomes a main basis to reform stacks of storages becoming an interesting Public Domain for the contemporary society. The arrangement of the National Archival Collection must be changed, equipped with an electronic safety and fire-protection, with microclimatic device of each specific storage room to become attractive storage with bright and light colors, despite requirements for its air conditioning must be maintained constantly. Quarantine process and laboratory which indicate obstinacy of the experts in carrying out historical process documentation is something interesting to be seen.

Its urbanity strategy refers to site condition and its surrounding area. Based on calculation of program scope which will be accommodated into the site then this library building can become a new landmark. A tower that keeps the State assets as well as ‘new public domain’; Imaginary line is used to obtain the new justifications in arrangement of new form amidst historical area. Imaginary lines which are taken from

The main strategy is to carry out consolidation of programs and media. Through careful identification the main programs can be divided into 3 parts. The First Part (A) form Podium is the programs that have direct relation with urban society, their location are right on over ground as response for public space. These programs consist of an informal Plaza, a literary café with a summer on trial terrace, bookshop, and shop selling material. The first and second floor area is specific Laboratory and management office. The third floor is a living room, which another public space, which the only gateway into the main library. Living room platform is a public area, in this platform the people can return or lend books, register them to become members or only spend leisure time to read newspaper. The Second Part (B) form Tower Storage contains stacks and study room. On the highest peak of this Tower contains Restaurant and Hall. Thus, this highest peak is more public. The floors beneath it in the form of storage divided into three parts; mix storage with an area of 2191m2, universal storage whit an area of 13000 m2, and jail storage whit an area of 6038 m2 is the most difficult to be accessed by the public.

Microfilming Laboratory, which comprises of lab of photography, lab of film development, lab of film copying and special workplace of visual and content check which are allocated for quarantine and arrange of book research are placed right under storage jail so that it facilitates in operation and control of books as a national assets.

Nonrectangular shear walls are created by joining perpendicular shear walls to one another instead of leaving them separate. They are often placed around elevators and stairwells in building cores to provide lateral strength and stiffness. The lateral resisting system was provided by a building frame system with concrete shear walls founded on mat footings. Tower shear walls were located at elevator cores, stairwells and demising walls. Shear walls were typically 18 inches thick with heavy boundary reinforcing. The cladding wall system is cast-in-place post-tensioned flat plates supported by structural steel frame. Slab thicknesses were typically 8.5 inches. Each floor and roof level was designed using finite-element post-tensioning software that provides for faithful modeling of actual geometry, including floor openings and changes in slab thicknesses. Slab closure pours were used at large slab areas to minimize the effects of concrete shrinkage. Portions of the level 24 restaurant floor were offset from columns below, such that the slab was suspended with tube steel tension elements to the roof and to the double glass cladding.

An under floor radiant cooling system that passively circulates air within the building's interior. A double-wall curtain wall system that preconditions fresh outside air and directs. Exhaust air to mechanical floors where excess heat is captured and reused. Fuel cells located on-site that produce electricity more efficiently than that available from the public grid; Waste heat from the fuel cells is also recycled into the building's heating and cooling systems.