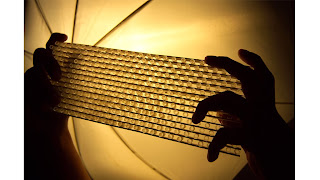 The Clients are spouses of graphic designers in need of a home and an office at the same time (SOHO/Small Office Home Office). Hence, the dialog between the domestic area and working area is the most essential part.

An opening at the back of the site becomes a private area for the occupants, while the public area is located at the front of the site. This zoning accounts for the genuine condition of the area, a vacant land children used to play soccer in. To preserve the spirit, the Building Embankment is drawn back about 8 meters to create a public area in the front yard. Social functions and academic events such as graphic community discussions can be held there.

In addition to the clear zoning, the façade is also an essential part of the communication device to communicate with the surrounding neighborhood. Conceptually, “pores” are the secondary skin of the building, in which having “pores” means that the building can breathe. Bamboo is chosen as the primary material for its sensitivity to climate. The bamboo is installed by staking one onto another, with no nails used, because it will hold on stronger and leave no jointing marks. The area between the secondary skin and the façade of the building can be used as a verandah and smoking area. Structurally, this building is an urban infill. A steel structure is used to speed up the working process and exploit neighbors’ sidewalls on the left side of the building.