The primary question in the design of public space is whether to intervene, so Taksim square has a new value and landmark at the same time. In this millennial year, digital society has specific expectations. Since is it really easy to get an all information through the internet, so experience-based new public space has become the most important specificity. Introducing new public space, which is part of superimposition of movement, tradition and reinterpretation of history in that area. 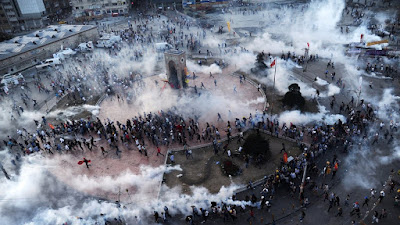 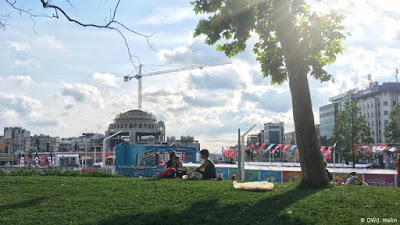 Then, by offering an experience while providing an opportunity to be at a different level, this place finally becomes a new attractor. The strategy used is to do a superimposition of old & historical value with contemporary programs or events. So, the square becomes full of contents but at the same time, appreciates with either context. 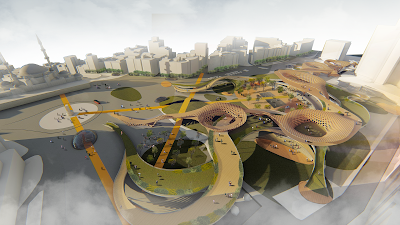 Understanding in-between spaces by introducing organic softscape, and creating disrupted wooden mushrooms which integrates with pedestrian bridge between programs, events and space running side by side and flowing like a water parametric wooden system intertwining the pedestrian path. 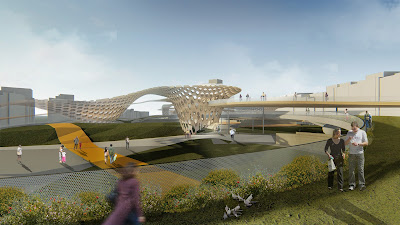 We want to maintain the Gezi Park structure but also introduce an additional softscape to make the experience more meaningful. This will provide energy for people's trajectories that will experience the floating space as a contemporary public space in the sky. 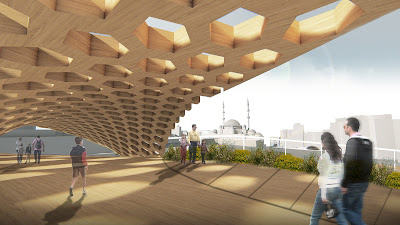 This will merge between imaginary space and reality. This is an offer coming from an experience-based place that makes the specificity of the place very important. When you redefine the public space and innovate the contemporary architecture, it can be called Taksim highline-scape. 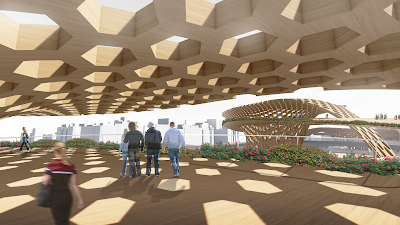 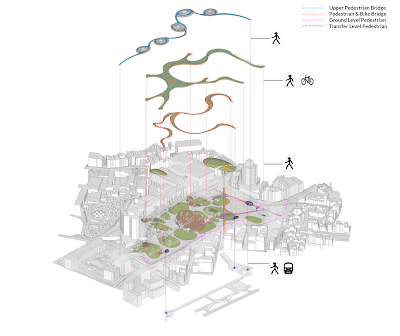 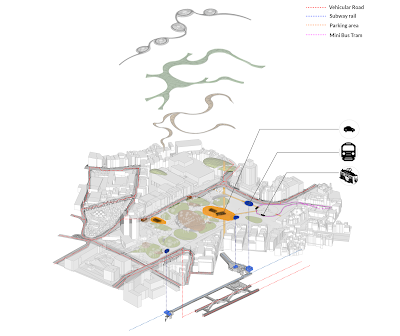 By introducing undulating softscape, we provide experience-based public spaces, that have a different level of elevation, and at the same time have different views to see the city and understand the connection between the city and the sea. 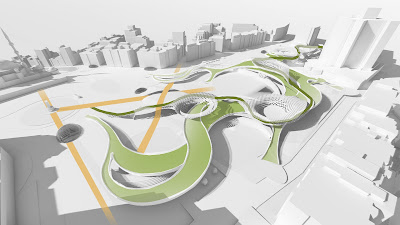 On the urban design strategy, we wanted to connect all of the green areas on the city. It became a shawl of the square. This green shawl will connect existing greeneries into one, by introducing softscapes on the square. 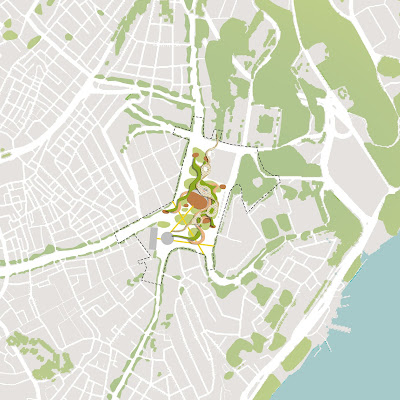 Garden in the sky

Garden in the sky makes Taksim square offer a new destination that connects the public space and the sea. People can walk from the blue mosque and republic monument across the square to the Gezy park trough the fluid pedestrian bridge. 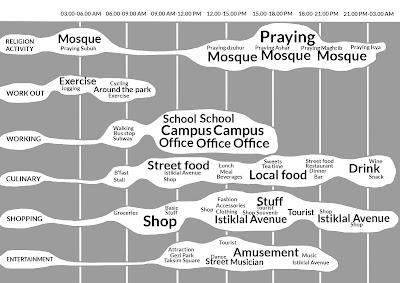 Disrupted mushroom pattern is a sculptural imagination of contemporary mushroom that connects several areas while creating wooden structures that support the pedestrian bride. This gives new values to Taksim square. 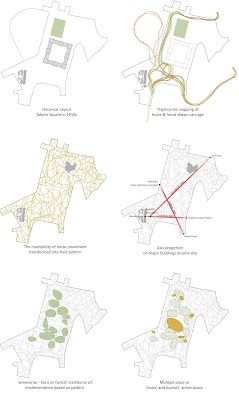 We wanted to create an organic shadow from the organic landscape. During the summer time, this place can accommodate many people in Taksim square and they can stand under the shadow of the undulating landscape. 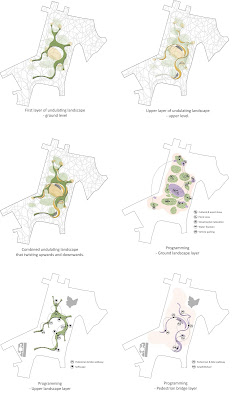 We proposed to create several intimate amphitheaters and plazas to accommodate local culture performances but also as new sitting places for people to interact each other. 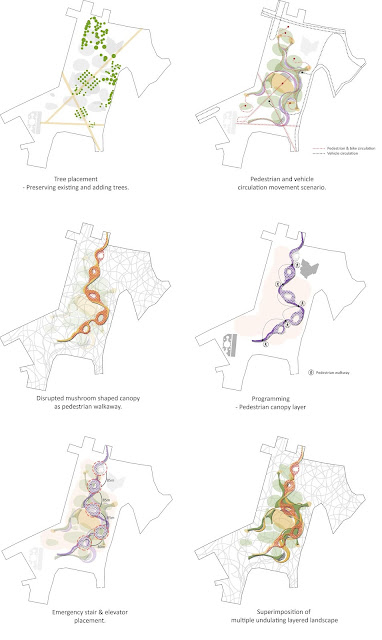 We want to provide Dialogue between historical artefacts and reactivate the place with contemporary programs. That’s way, we mark the existence of Taksim square since 1910. 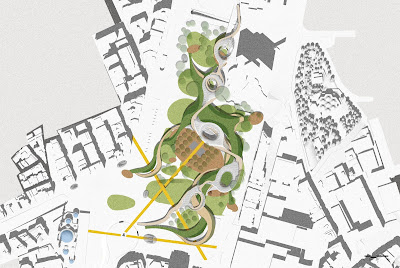 Between programs, events and spaces running side by side, water parametric wooden systems intertwine the pedestrian path.

We divided some concept ideas into several layers which, when superimposed, will produce an orchestra of various layers. All programs and architectural forms are formed because when all these ideas are put together, it becomes new uniqueness for the place. And Taksim square will produce their own story without losing the original meaning.

Lighting is an important aspect of all this planning. Basically, all the lighting is of a very gentle kind. So that some spots such as wooden mushroom tower become highlights and the organic form of this landscape gets sufficient lighting and is very responsive to the pedestrian that passes through it.

The street furniture concept is an integral part of the whole project so all of it should be designed based on the material and form concepts developed from organic landscape.

Water is part of the attractor experience so we proposed to bring a fountain that is automatically moved to the plaza area near the main amphitheater. Lighting is also an integral part of this fountain. 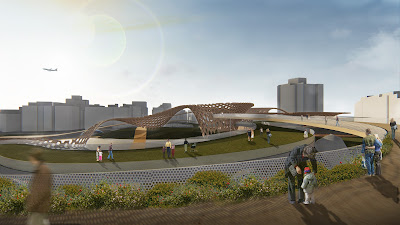 Wood acts as a medium to communicate between human and nature. Even the bridging pedestrian is made of concrete structure, but on the lower side, we want to use wood as softscape. Likewise, with the disrupted mushroom structure which is also made of laminated pine wood. With the current technology of parametric systems and laminated wooden structure, this landmark will provide Turkey with the opportunity for technological and architectural advances throughout the world. It will be aligned with several landmarks in the USA and Europe. 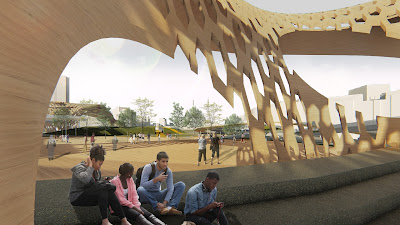 We want to maintain all existing trees. Although some trees will be relocated and arranged according to new concepts. Since this is the strength of Taksim Square. we want to provide aspects of sustainability. 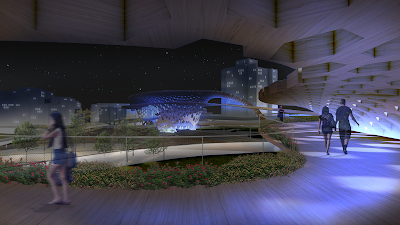 Plant on the pedestrian bridge

We want to cover most of the organic landscapes with bush and grass. It will make the environment just like tropical garden in Mediterranean scape. And also, on most of pedestrian bridges, we are creating organic shape landscape full of bush and grass.