This fourth installment in the series of articles on selected young ASEAN practices is focused on an Indonesian design studio that has gained much traction in the industry in this region with their distinctively exploratory approach to architectural design. Budi Pradono Architects (BPA), founded in 1999, is a research based architectural studio with an interdisciplinary focus on inclusive rigorous methodologies of research, collaboration and experimentation. It believes in the concentration om the characteristics and specificities of each and every project as part of its individuality and conditions that surround it. BPA seeks an architecture or design that interlinks, shifts and expands on considerations that range from program, to typology, material, structure, to larger contexts of social, environmental and cultural dynamisms. It engages itself on various scales of project to relate design in search of connectivity and relation at multiple levels and facest – be it product design, or urban infrastructure. BPA pursues a resonance in the creative explorations during the design process as an opportunity for connections and relations. A selection in three of the studio’s project is presented here to explore this perspective. 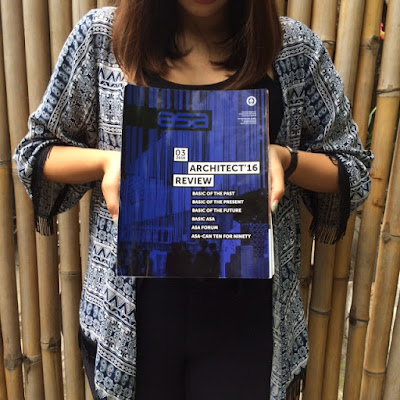 The first example to illustrate BPA’s design philosophy of connecting architecture with its users and environment is the A House. The 183-sqm residence, located at a corner af a street in Bintaro area in the periphery of Southern Jakarta, was designed around an existing 9m-tall Ketapang Kencana tree. The design team first sought to preserve the tree and used it as a guiding principle design element by organizing living spaces around and in relation to the tree. With an objective to achieve a ‘home with environment  as a new oasis to live’ several fundamental questions were raised during the design process – such as ‘what if the bed is on top of the tree?’, ‘what if the homeowner can do the contemplation in the bathroom, in the middle of the tree?’ etc. Some additional trees were also planted on site to amplify this feeling of living in a jungle. To translate the idea into reality, the design team inserted the master bedroom with its en-suite bathroom on the 3rd floor – 8m above ground, among the tree canopies. Some parts of the roof is made with a glass skylight to bring in natural light and to induce a stack effects of air movement from the bottom of the house up to the roof level. A ceiling with reflective material was additionally applified throughout the house to give it a character and to reflect the light from the outside and the tree silhouettes. The living room is placed on the 2nd floor adjacent to the lower part of the tress, with an intended increased visibility to the branches, where by the noisier 1st floor houses the pantry and dinning room. To mitigate noise pollution stemming from motorcycles passing by every morning and evening, a barrier wall with its stepped down section toward the inside of the house is provided. The amphittheatre-like shape of the wall is used as additional seating area for the dinning room. It is intended that this micro-scaled home greening strategy would eventually contribute to a greener Bintaro district. 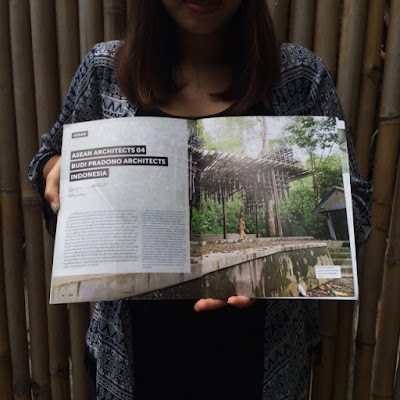 This relationship between architecture and its surroundings was further explored in the Dancing Mountain House project. Here, instead of designing a house around a tree, the approach was tested on a much larger scale – to mimic the topographic character of its natural setting at 2.000m above the sea level on the ridge of Mount Merbabu, and with it being surrounded by several other mountanis. The project was conceptualized by interpretation of the multiplication of Javanese village houses and the reinterpretation of the traditional roof structure by adding the mountain-shaped roof features which serve as skylight to bring as much natural light as possible into the building. 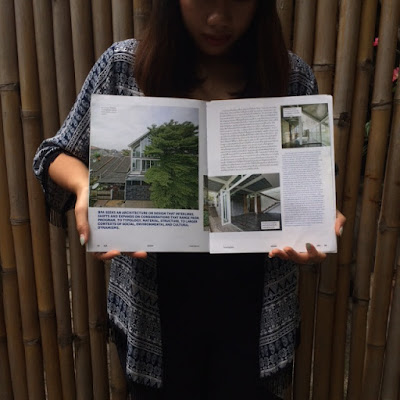 The structure was made entirely out of bamboo with traditional techniques assisted by new construction technology. Local materials such as brick, bamboo and stone were used in differing ways. There was, in addition, a starategy to utilize recycled and reused from the old house that used to be sited there. What is more surprising is the fact that the house was not built by a professional contractor but by the local community  at large. The homeowners are both retired lecturers who wanted to share their collection of economic and science books to the surrounding community, so there is a part of the house that is dedicated to serve as a library that can be accessed freely by the local people. To summarize, this house is a noteworthy example of how architecture can engage various aspect of social and economic drivers and putting them together to function. 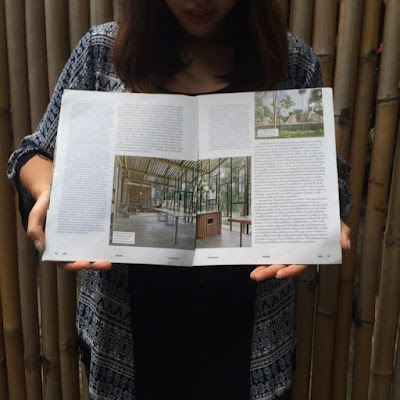 A concept similar to the Dancing Mountain House is applied once more for the design of I-Shelter, a 30-sqm bike race shelter for the Tour de Ijen, an event organized annually in Banyuwangi of East Java. The form of the shelter was derived by mapping the height of mountains and the depth of volcanic craters in the region, a method referred to by BPA as the ‘Specificity Of Place’. The fragment formation of such topography is then realized three-dimensionally by the stacking of 5mm wide bamboo laths vertically and horizontally. The whole shelter is made of Petung bamboo that can be found around Gunung Ijen, a building material that was preserved traditionallly by soaking it in the river for 8 months before use. A layer of polycarbonate sheet is then slipped into the centre of the bamboo roofrops to make the shelter functional. This location is also well known as a popular hiking trail, where the shelter can be used as a resting spot for hikers and bikers outside of the competition tournament. Though small in size, BPA believes im how architectural design can become a device for making more meaningful places rather than just functioning as nere shelters. As aptly stated by Budi Pradono, ‘I believe that a small project is a chance as well as a challenge for an architect to build a strong concept and also to utilize architecture as a device to elevate local strengths, re-elevate the local preservation method which has long been forgotten, as well as creating a unique and specific place’. 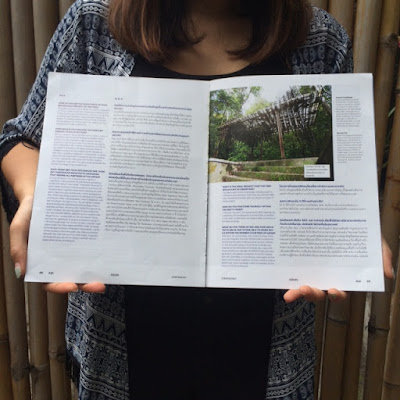 BPA’s works ilustrate that there are several ways in which the surround and context-natural of human, can be integrated in the initial approaches to architectural design. A sensitivity and respect to the givens in context can work together with building techniques to conjure meaningful spaces, and subsequently social communities. These are frameworks upon which BPA challenges themselves to rethink, reevaluate and inform in the basic necessities of buildings and surroundings in their work. The attention to social and environmental awaremesses and the responsibilities that carry along with them, adds yet another dimension to the mere intrinsic nature of buildings and shelters. When carried across a multitude of scales and sites, the results can often produce appropriate and enlightening responses that delights an enriches, hences providing that connectivity that is often so critical in engaging both project requirements and site locale together. This thus becomes a paramount attribute that illustrate and perhaps should inspire architectural practices on how they can engrain themselves in the context that they operate – responsibly.

HOW DO YOU SEE THE IMPORTANCE OF IDEAS BEHIND EACH PROJECT OF THE FIRM?
Each place or project has a hidden and specific characteristic. This is where we are very interested at exloring more in local environment characteristic, such as wind, lighting, as well as local material, or space program required by clients. The invisible character that we found in the field may be become our tools so that it can create such new ingredients for a new architecture.

HOW WOULD YOU DESCRIBE THE FIRM’S APPROACH TO ARCHITECTURE?
BPA as a research based architecture firm uses a variety of methods in each project for finding the invisible characteristics of a site; that even is able to gather standard programs to be the new ones. Thus, we are very glad to have collaborated with a variety of disciplines, so that we can obtain new things in the design process. Another strategy is using mock-up models and 3D software as both tools in parallel procedures. In this process, it creates space and the experiment of programming and materials in which, I believe by making the real model in scale is very important, it can allow the space to be intuitionally felt directly. This stage is very crucial to us.

WHO/WHAT ARE YOUR INFLUENCES? ARE THERE ANY PARTICULAR ARCHITECTS/DESIGNER THAT INSPIRE ALL PARTNERS IN THE OFFICE?
During my study in my undergraduate program in Yogyakarta, I have explored the architecture approaches by Bernard Tschumi who wrote “Manhattan Transcript”, a book mainly focusing on the dis-programming theory. At the same time I was also interested at studying any theories on deconstruction architecture, maninly expressed by Peter Eisenman giving questions on status quo of modern architecture. After I had graduated, I was in obsession with Rem Koolhaas’ writings in S M L XL, as well as I started to love and like the architectural works by Tadao Ando, a Japanese architect, whose works I visited throughout the world. However, the one that gave me the architecture view and strength before I opened my own practice was Kengo Kuma. I worked with him for two years in Tokyo, and had the opportunity to explore architectural design in millimetre scale sizes. As I further studied in broader scale (urban scale) from Winy Maas (MVRDV) under his studio at the Berlage Institute in Rotterdam Netherlands, I came across studies in kilometre scales, it required me to lay the grounwork for design methods that propose contemporary architecture.

WHAT IS THE IDEAL PROJECT THAT THE FIRM WOULD LIKE TO UNDERTAKE?
The ideal project is both small project an big project. In millimetres and kilometres, both have very extreme difference. We expect that each year we will get two types of these projects.

HOW DO YOU POSITIONS YOURSELF WITHIN THE NEXT 5 YEARS?
In the next five years, the researches by BPA hopefully can collaborate with the programs in some of the universities in the world, so that these will create further innovations in architectural design.

WHAT DO YOU THINK OF AEC AND HOW ARCHITECTS ARE IN THE FUTURE ABLE TO WORK EASILY WITHIN THE MEMBER COUNTRIES OF ASEAN?


With AEC, we should study with those in Europe. There must be integration between ASEAN level competitions concerning the public building such as campus, schools, as well as social housing. The similarity of climate and material can be anticipated simultaneously, meanwhile these will give new strength for ASEAN to get rapid new generation with specific characters. As for the cooperation with universities, it must also be encouraged, so that there will not only be a platform of cross culture but also a platform for cross knowledge, which is neccessary for the future of ASEAN architecture.
Posted by extravaganza at 7:25 PM