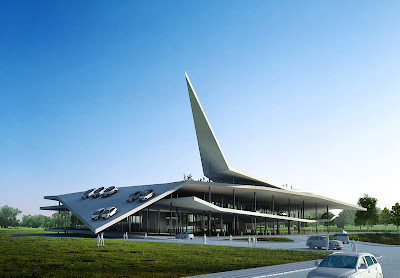 
“The house is a machine for living in.”
With this statement, Le Corbusier acknowledges the relation between technology/mass production and the new ways of living that the modern movement tried to materialize. 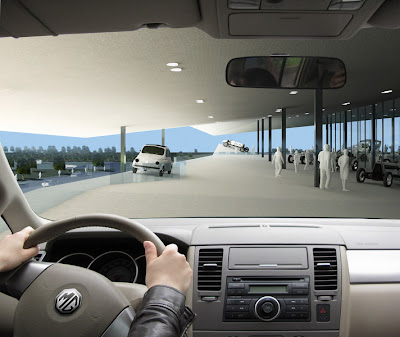 For him the house was a static car, a designed functional object that could be mass produced. When the Villa Savoye was completed in 1929, 5.3 million cars were produced in Detroit. 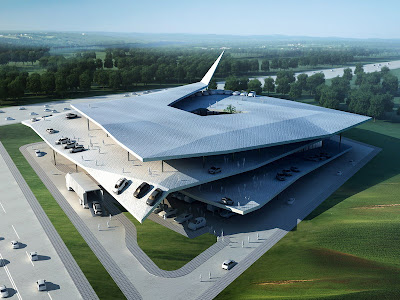 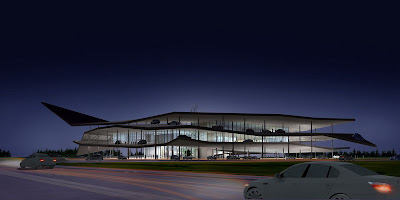 Along this line we find the new Nanjing Automobile Museum by 3Gatti Architecture Studio, which was awarded with the first prize on an international invited competition. The project not only shows the car in an unusual way, but it also lets you to experience the museum by car.

“Car Experience” is a project for a building to be dedicated to the automobile: the car as an object of desire, a world to explore, a technology to study, an article to display and a means to travel around the building. 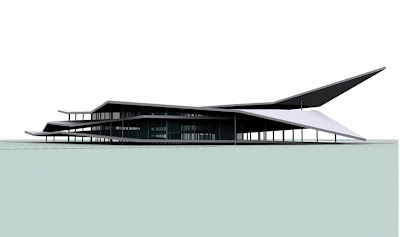 Here the world of the automobile intersects with the human and organic world creating a new tectonic structure with methods differing from the usual flat open spaces, squares.All on a human scale. Here everything is geared to the automobile – the car is the point of reference. 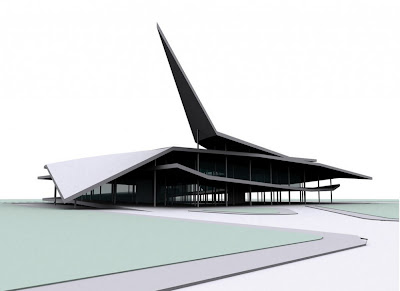 3GATTI Architecture Studio of Rome and Shanghai have won a competition to design an automobile museum in Nanjing, China.An external concentric ramp allows visitors to drive around the exterior of the museum in their own car, past the exhibits to a roof-top car park. Visitors then descend through the museum on foot via an internal ramp. 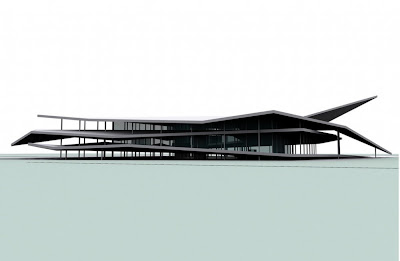 It is difficult to identify one single and continuing exploratory theme in the work of Francesco Gatti. His aim is to experiment with heterogeneous solutions, each time meeting the challenge offered by his new creation’s specific conditions 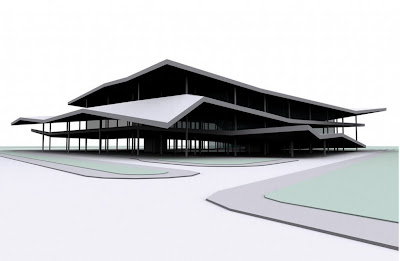 From the ethereal virtual ceiling of the redevelopment project “In Factory” – his first Chinese work – to the curved forms of the Ze Bar, from the sculptural faceting of the Red Object to the spotted epidermis of his transgenic houses, the architect with Roman origins has never let himself be bound by a specific or recognisable aesthetic style. 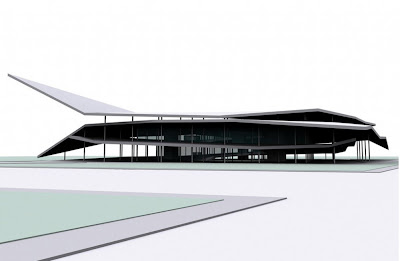 The same applies in the winning project for the new car museum at Nanchino where Gatti has envisaged an origami on urban scale.The visual design backs up the fundamental practicality of the project in that it is the distributive organisation and the functional layout that determine the shape of the building. 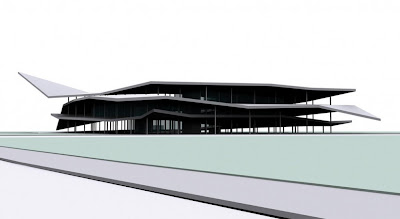 The museum is articulated in two concentric helicoidal ramps; in the external one the visitor drives up the exhibition area in his own car, an experience that the architect describes as a “safari” because the visitor, as a motorist, is an exhibit himself.

The moving cars travel upwards diachronically (chronologically) in the folds of the origami from futuristic cars down below to vintage cars above and then up again to the car park on the roof of the building.

Here the visitor leaves his car and does the return journey on foot down the inner spiral ramp. Descending he sees all the exhibits as well as varying-sized glass boxes which house the complementary functions of the museum (offices, meeting rooms or laboratories). 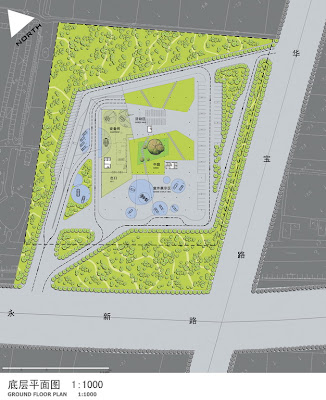 Once on the ground floor the visitor can take a lift and return to his car on the roof, or perhaps he may find it waiting for him down below for as Gatti himself observes “In the China of opposites, those who have the economic means to possess a car also have the means to have a personal chauffeur.” 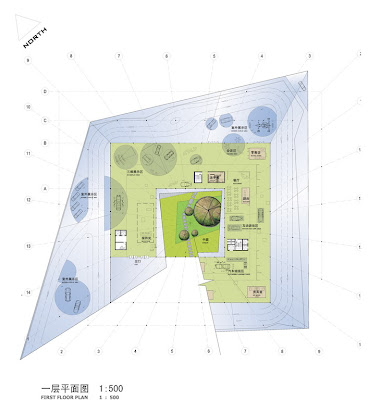 The architect describes the museum as a “movie sequence in which the principal actor is the car”, a building where two car-related panorama go hand in hand: on the one hand the architect’s conscious attention to motorway aestheticism and urban scale – the structures and materials remind one of a viaduct – and on the other, his transportation into the museum of the ergonomics of the interior of a car. 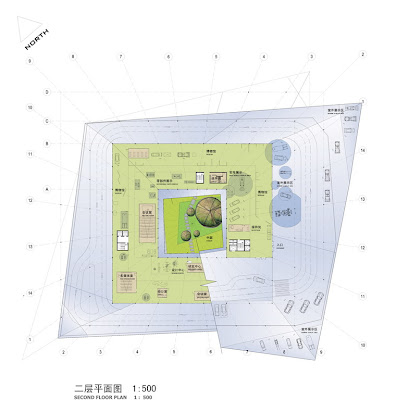 The furbishing and details within the edifice are related to and on a scale with its specific functions and it is not difficult for the visitor to imagine that he is in a car on a highway, rather than in a museum. 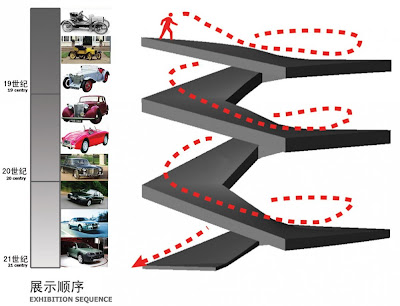 Here one will not find stairs to different floors, walls and elevators, but ramps which wind sinuously upwards creating a fluid conception of space, and where the flux of cars can move freely and reach the different levels of the building.

On an overall scale the area tectonically resembles a road, with a structure similar to that of an elevated motorway or a car park, but on a more human scale, the structure is as complex, ergonomic and sophisticated as the interior of a car. 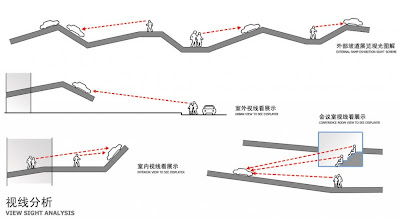 The principal structure of the building is a spiral ramp with a glass partition dividing the exterior from the interior. In the internal part, reserved for pedestrians, the incline is more gradual, whereas the exterior and steeper side is for the transit of cars.

The building’s typology develops sequentially, its structure similar to that of a film where the undisputed protagonist is the automobile. In fact the visitor, as the spectator of a film, is obliged, frame by frame, to follow the physical and psychological route as dictated by the museum’s architect. 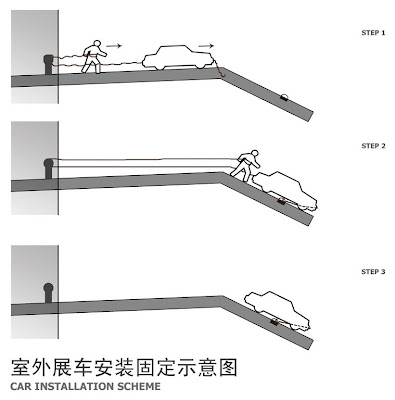 The visitor enters the museum with his own car and initiates the exhibition’s journey as on a safari, going up the external spiral and experiencing a rather “extreme” sensation – as the ramp consists of rapid ascents and descents which create an undulating, uneven surface facilitating the exhibition of cars from different angles and enabling the visitor to observe them from either above or below. 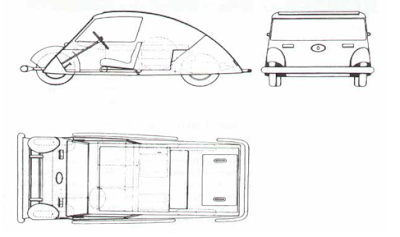 This alternating movement with its practical yet amusing function creates a corresponding visual effect on the outer façade of the building, which appears as a fanned sheet of paper, folded and refolded, and where each fold is an opportunity to exhibit at a suitable angle the cars which are attached to the inclining floor.

The route through the museum for the visitor who arrives by car will thus start at ground level and will ascend via the spiral ramp to the top of the building. Here he can park his car and enter into the museum on foot following the exhibition’s descent to the ground level via the more gradual spiral. 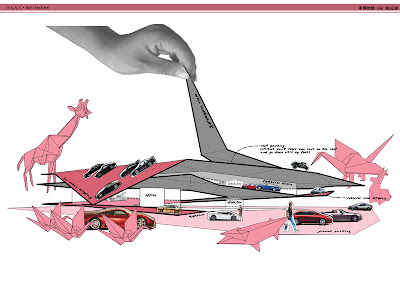 He can then take an elevator to return to the top of the building to collect his car; should he have arrived in a car with a driver who is awaiting him at the short-term car park at ground level, he can go there directly from below and leave from there. 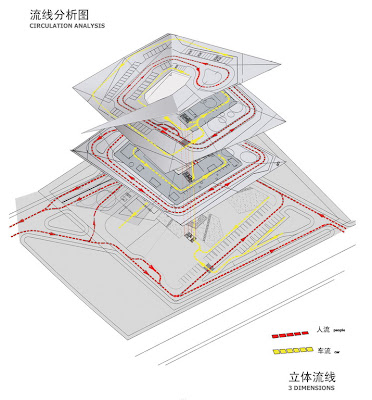 In this way visiting the museum is divided into two types of experience:
The first is the experience of going up in one’s own car. As one ascends one advances chronologically from the more modern cars down below to arrive finally at the vintage cars on the top level. With this route one starts from a ground display level where the ceiling is 9 metres high and one arrives gradually at the highest display at the top of the spiral where the ceiling is only 4.5 metres high. 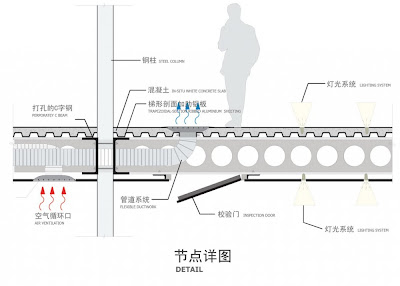 During this route the car ramp is uneven and the abrupt ascents and descents as well as the inclination of the cars exhibited, encourage the observer to frequently change both focus and view point; this generates a versatile experience which is rich in visual and perceptive stimuli. 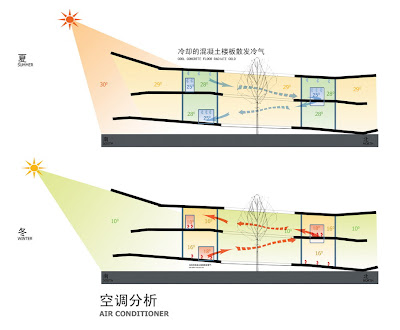 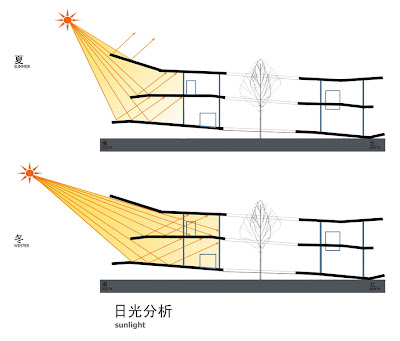 View points
The second is the experience of going down on foot. Contrary to the previous experience the descent starts chronologically from the display of vintage cars at the top and arrives at the more modern cars on the ground floor. 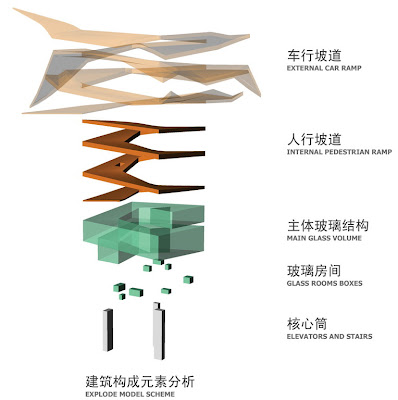 The descending spiral ramp has an incline which alternates gradually from 0 to 7%, and thus the flooring slopes imperceptibly and takes the observer to the ground level with minimum effort, as on a slide. In this way it becomes possible to appreciate fully the exposition and not be distracted by steps, elevators or other obstacles; the visitor’s vision is free to wander, unencumbered. 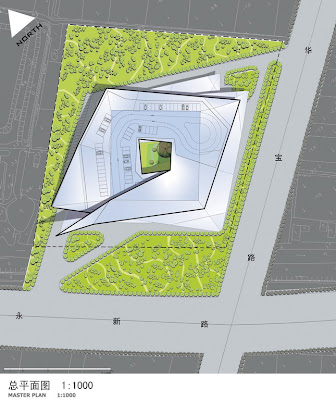 Along the surface of the ramp there are occasional glass blocks or “prisma” which protrude from the flooring and ceiling. Their size, depth and type depend on their function as each one is intended for something different, for example if the area is intended for open space functions, or if it is intended for functions that require greater privacy such as offices, meeting rooms, conference rooms, laboratories, bathrooms or kitchens.

The outer façade of the building is completely permeable and reveals on sight the interplay of the different levels and the fluidity of the internal and external spirals. The building could seem to appear as an urban car showroom, with its corners and angles filled with tempting shining automobiles. 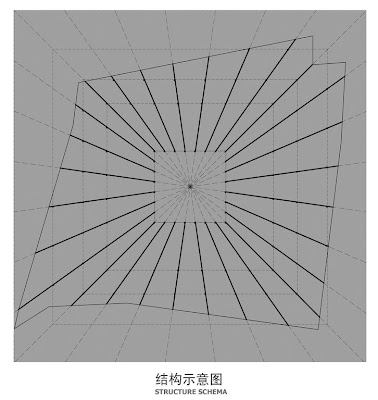 The objective of this project is to become an international point of reference in the world of automobiles and an unmistakable landmark for the territory of Nanjing, immediately recognizable by whoever transits the surrounding roads but also visible from the sky and, why not, even from the satellites from which an increasing number of internet-nauts explore the sights of the globe.