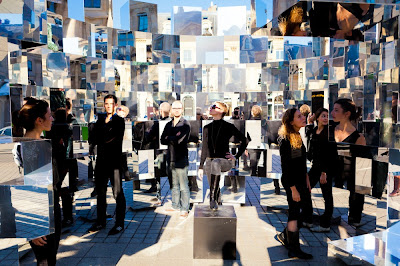 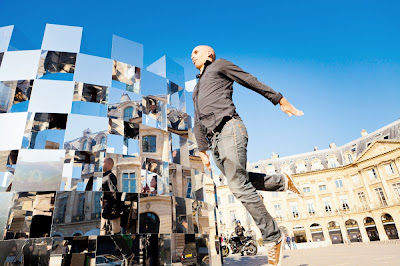 From 20-23 October on the occasion of FIAC 2011, passers by at the Place Vendome became the spectators of a monumental mirror installation produced by Arnaud Lapierre, in collaboration with Audi is a reflective cylinder composed of mirrored blocks stacked in a variegated fashion.
It plays with the context of this urban space through reflections, light and the interaction of passers.This is an exceptional vision that reflects a newer version of a dynamic urban space that interacts with its environment. 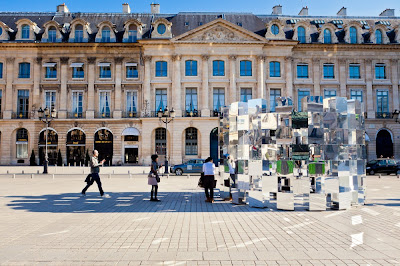 The vast amount of reflections and angles warps the perspective of the surrounding area. The optical effect creates a surreal environment in which both the structures and people are distorted and recreated, fracturing the usual relationship that individuals have with the piazza as well as themselves. overall, the installation measured 5500 x 4000 mm (216 x 157 inches). 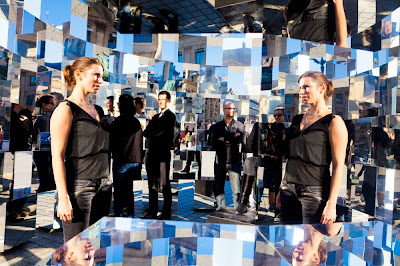 A film and photography devotee, Arnaud Lapierre’s creations are distinguished for their individuality and allure. His inspiration is always derived from the human mind as a source, in other words a type of a perceptual script that combines objects of emotion and desire, sensory translation and questioning, creating an unexplained appeal to the viewer-something like a new interpretation or vision of the world. 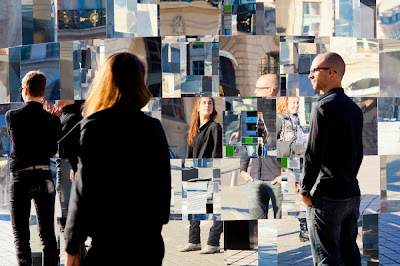 His work portfolio, rich in collaborations with prominent designers, big names in architecture and award-winning projects, sets him amongst the most sought-after emerging designers. 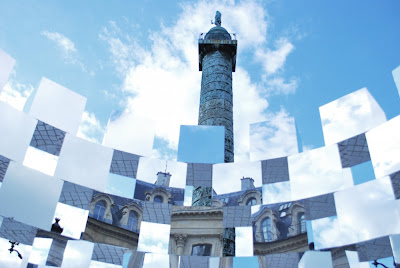 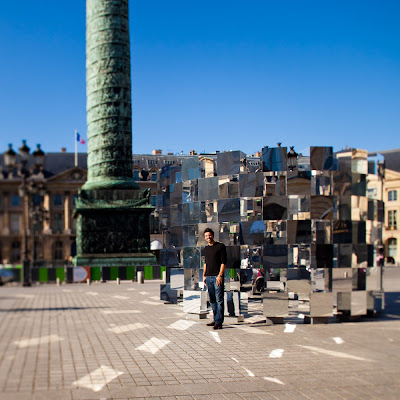 The installation features a cylinder-shaped mirror dressed in 4-metre high cubes, creating the sense of a distressed urban space. 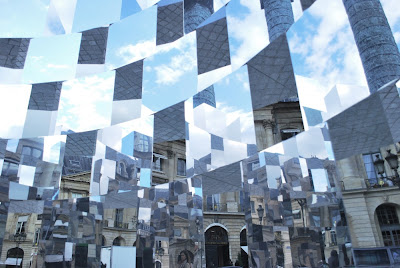 About the Ring structure, Lapierre explained, ''The Ring' is an installation that takes into consideration the urban space networking: the rhythm, flow, organization and spatial hierarchy. The installation embodies a visual effect that is to connect all of these interactions through the implementation of an optical effect: the repetition of a cubic mirror to break the perception of the place.'' 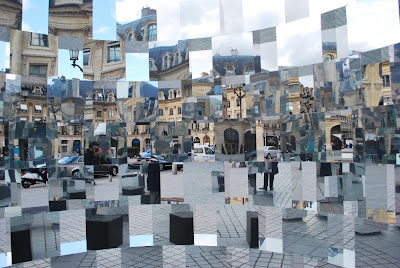 The view from within looks remarkable, it’s a shame Lapierre’s work is only temporary.  However modern it may appear, it looks at home in the classical buildings around it in Paris. The simple repetition of the mirrored blocks creates an interior and exterior space where the urban context of Place Vendôme is filtered selectively through the defined volume of the installation. 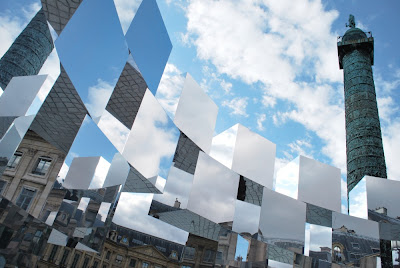 It essentially deconstructs and morphs the surrounding buildings and sky and produces a disorienting, but engaging experience of the plaza. 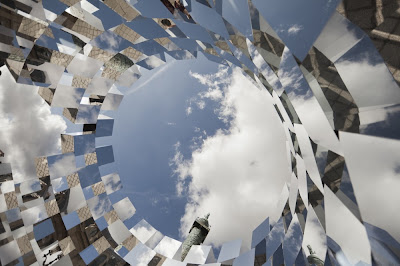 The buildings appear and reappear between the mirrored surfaces and voids, changing the perception of space and enclosure for each user. It alters the condition of the plaza by creating spaces that are at times transparent and at other moments reflections of the visitors, the sky and the buildings beyond. 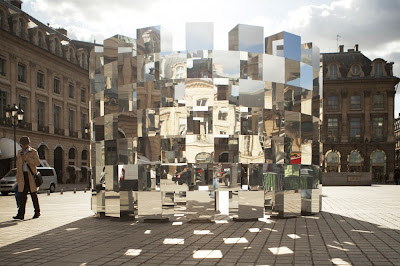 Through the implementation of an optical effect: the repetition of cubic mirrors, the conventional perception of the space is “shattered”. 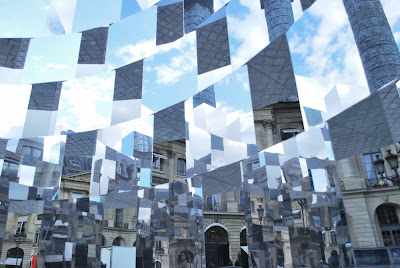 By segmenting the appearance of the square, a new reading of space is introduced. The structure establishes a different kind of interaction between individuals, built space and movement. 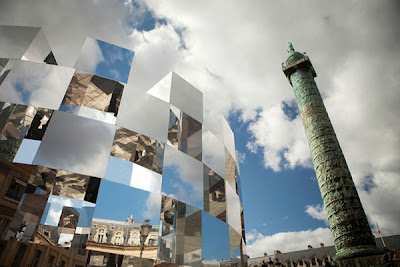 The facets of each cube reflect the place and reconstruct a paradigm that breaks the reading of the course. The Ring works at this stage as a visual intrusion, an acceleration that changes the perception of the visited place. 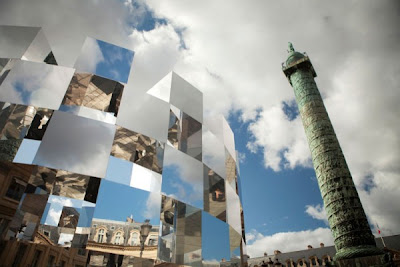 On the other hand, the circular layout of the structure invites the visitor to step inside, exposing him to collided images of details, intimacy and outside spatiality. 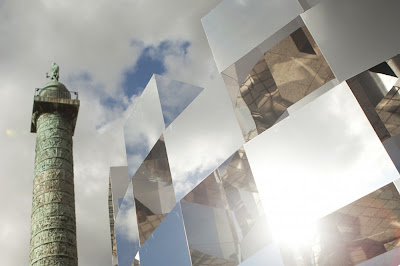 The Ring visually deconstructs space, but does not reconfigure it physically; it leaves the elements in the state of decomposed images, pieces of a puzzle hovering and waiting to be reassembled. 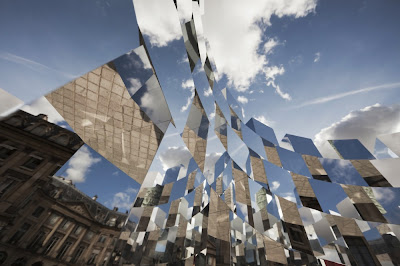 This dynamic installation changes the relationships between individuals and the space they are going through. 'Ring' invites the visitor to play with the installation and space on two levels. 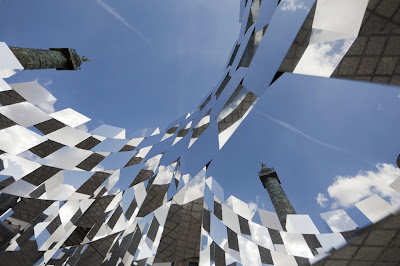 The first level would be more related to experiencing a change in the urban areas: as temporal kinetics. The facets of each cube reflect the place and reconstruct a paradigm that breaks the reading of the course. 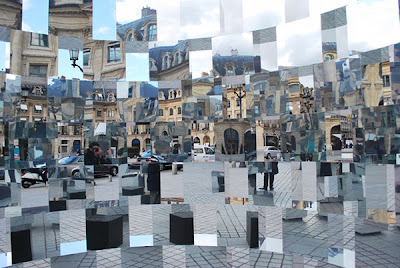 At this stage, it is a visual intrusion; an acceleration that changes the perception of the visited place for this is a spatial rediscovery. 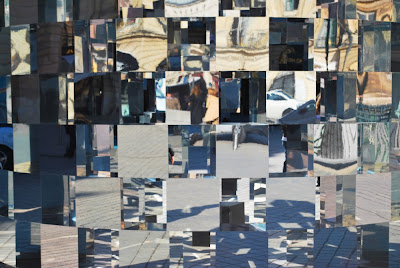 On the second level, the installation proposes to get inside, to see its own image multiplied to infinity, which collides with urban detail. 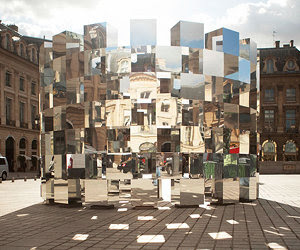 It is now a place outside time and outside spatiality, in total rupture with the outside principle. Now, the vision is more intimate. 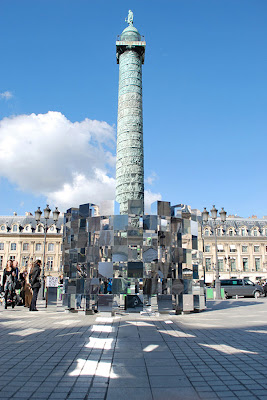